What can you do if you hardly have enough room at home, but you really need to have your home office somewhere? That was a question that Maria Olinger from Raumio asked herself. So she developed a cabinet that can make a fully equipped home office, including a chair, storage room, lighting, electrical hook-ups and much more, simply vanish. The prototype was financed with a crowdfunding campaign. Here are the crowdfunding tips from Raumio.

Maria, with a lot of crowdfunding campaigns, the focus is not only on financing but also on market testing or marketing. How did you experience that?

That’s pretty much how it was for us too. I had reached a point where I wanted to get out there with my product and test it to see how it would be accepted by the market. 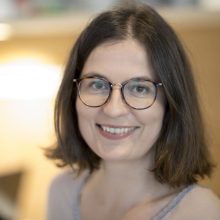 For me, the campaign was more about gaining recognition, getting feedback from the crowd and continuing to develop my prototypes than it was about major sales results. We knew that a product with a high price point like Raumio isn’t something that a person just buys on impulse. The selling process is longer, and customers want to view and feel the product and perhaps even have a trial run working in Raumio.

That’s why we decided to run the campaign at the same time that we participated in the trade show “Heim und Handwerk” in Munich — with the aim of having online and offline marketing measures mutually fuel one another, which worked for the most part.

Projects in the furniture industry fail more often than average

How did you prepare for your campaign and where did you receive good support?

As the first step, I looked for similar projects on the most common crowdfunding platforms. I quickly realized that projects in the furniture industry can fail more often than average. As a result, I tried to increase our probability of success by setting a realistic and more moderate funding target.

What really helped and motivated me was comparing notes with other founders and potential campaign initiators at the crowdfunding breakfast. And without the Chamber of Industry and Commerce (IHK) and funding from the city of Munich, I would have never even found out about crowdfunding campaigns as a marketing initiative.

What was the most helpful tip given to you while preparing for the campaign?

What was valuable for me in the beginning was the sound advice given by the city of Munich and the IHK for selecting a platform and the dimension of the campaign. The advice and invitations to events during the campaign were also just as important for gaining more attention.

Mobilize your own network and persevere!

What was the biggest challenge during the campaign?

The biggest challenge for us during the campaign was definitely getting enough people to notice my campaign and to actively advertise for booking the rewards — I underestimated that part a bit! I’m also sure I would have been even more successful if I had set the campaign to run for a longer period of time. That would have given us more time after the simultaneous trade fair to actively advertise.

So my advice for every founder is to actively make use of the time during the campaign, to make plans ahead of time for mobilizing your entire network and to persevere — it’s worth it to give your all and hold nothing back! Only those who persevere succeed!

Invitation to a TV show

What did you experience during the campaign? What surprised you?

What surprised me was the fact that the campaign got the media interested in us. The campaign hadn’t even been active for two days when an invitation showed up to appear on an inventor/founder TV show. A different invitation to a crowdfunding conference and the opportunities that resulted from it for networking were also really helpful.

Feedback from the crowd led to product adaptation

What long-term effects came from the campaign? And what are your plans now?

With the money from the campaign, we’ve been able to finance the prototype for our smaller design, Moretti. And from the feedback from the crowd and discussions at the trade show, I learned that “Raumio Moretti” needed to be smaller and more compact than it already was. We reduced the dimensions of its design as a result. Now an office chair fits in there well and when it’s folded out, you have a desk that’s 120 cm wide (approx. 47 inches) and 210 cm (approx. 82 inches) worth of shelf space for binders, books and so on. When it’s folded back up, “Raumio Moretti” only takes up 0.78 m2 (approx. 8.4 ft2) of floor space.

We’re expecting the prototype to be delivered in late March. The coming months will then be about marketing and finding distributors and business partners. Thank you crowd!