The hottest probes on the planet are from Munich! The Munich-based startup Vectoflow is making quite a stir in the fluid measurement market with their probes, which are not only smaller and more robust that the rest, but can also heat up to roughly 3270°F. Business is going well, which justifies the ambitious goal set by the founders: for Vectoflow to be the global leader in flow measurement technology in three years’ time.

What do gas turbines, Formula One, drones and exhaust hoods all have in common? That’s right – they all work with flow. To precisely determine the speed or angle of attack, probes are used for measurement. What might sound simple at first has often proven to be quite difficult in practical implementation. That was something Katharina Krietz, Christian Haigermoser and Florian Wehner were not willing to put up with any longer, so they founded Vectoflow. Katharina explained what motivated them:

“We were already quite involved with fluid dynamics during our studies, and all three of us continuously faced the same problem: probes that were not suitable for a specific application, probes that broke easily, software that was almost impossible to understand despite having a PhD in aerodynamics. So we thought there had to be a better solution.”

The challenge they faced: to develop probes that can be perfectly adapted to their application, are smaller and more robust, and easy to integrate into nearly all existing systems. 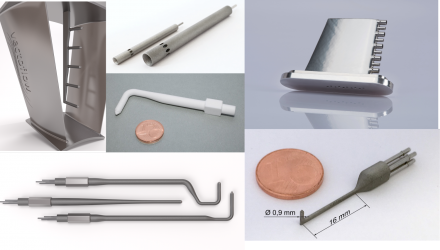 The team of specialists came up with the idea of manufacturing the probes using a type of 3D printing based on the powder bed fusion process. In this process, selected areas of a base material in powder form (powder bed) are fused together with a laser beam. This makes it possible to adapt each probe to meet the client’s requirements in terms of size, shape and material. The probes are also significantly stronger because they are manufactured in one piece. Founder Katharina elaborated:

“Our probes are more robust, able to adapt to any area of use, and are much smaller than most on the market. That is important, because a probe is meant to measure the flow without having any effect on the flow itself. We have developed both the smallest probe and the hottest probe on the planet; the latter can be used at temperatures up to approx. 3270°F (1800°C). Moreover, we are able to deliver measurements that are far more precise than our competition, which is in part due to our software and calibration algorithm.”

“We like to go out for a eat pizza with our investor every now and then.”

For two and half years now, the Munich-based startup has fulfilled a wide range of requests from their customers, a group which also includes Audi and Siemens. Considering how well business is going, Vectoflow seems to have recognized a genuine need with its developments. Katharina assured us: their cash flow is positive. With AM Ventures, they also have an investor on board that is more than just a backer and shareholder. When asked about what they feel is particularly important in terms of their investor, Katharina responded:

“Personal contact! We like to go out for a pizza with our investor every now and then. Their technical support is also important to us.”

Although the three founders are specialists in their fields, technical support is always welcome. Katharina studied mechanical engineering with a focus on aerospace technology at the Technical University of Munich. She then completed her MBA at the Collège des Ingénieurs in Paris. During her studies, she worked in the field of flow measurement technology for BMW, Airbus and NASA. While at BMW, she got to know Christian who had completed his doctorate in the field of fluid mechanics. The two started to work on the concept of developing innovative probes. Katharina’s MBA colleague Florian then came on board and completed the team of founders, which is now organized as follows: Katharina primarily handles sales and production, Christian mainly deals with software and calibration and Florian takes care of product development and finance.

Impressive support from the Munich network

The team works well, as does collaboration with their investor. So what about the city: does the startup feel they are in good hands in Munich? Katharina responded with a resounding “yes” as a true Munich resident. The founders also emphasized how much support they have received from the Munich network:

“We were given so much support from UnternehmerTUM from the very beginning: from EXIST at first, and then from the Techfounders program. After winning the Munich Business Plan Competition, we received support from BayStartUp. We are also currently part of the ESA BIC Incubator in Oberpfaffenhofen.”

The trio also has very positive plans for the future. If it all goes according to Katharina, things should go up, way up:

“We want to become the leading supplier of flow measurement technology within the next three years. And by that, we mean globally!”

The odds are certainly looking good.