Like every year, re:publica invites the digital community to Berlin to reflect upon themselves. We made our way to the capital city to report about the major conference!

If you ask yourself what re:publica is, you might quickly think of “digital bohemia,” of speakers like Sascha Lobo and Edward Snowden, the Pirate Party, gym bags and laptops — something that is somehow hip, digital and so significant that also the non-digital world takes note of the Berlin conference for a few days.

For one, the intensified momentum of digitization in recent years has made it impossible to differentiate the digital world from the pre-digital. When it comes to areas of focus, re:publica has also grown accordingly. For quite a while now, classic digital topics have been joined by topics involving politics, culture, economics, art and so on — it’s about society. Entrepreneurship, startups, disruptive technology and their impact are inherently some of the main subjects of discussion.

Business ideas from the ball pit

As in previous years, re:publica is being held in the STATION Berlin, a former train station in Kreuzberg. The enormous site is bustling with 8,000 visitors, and 770 speakers are scheduled to speak on 17 stages during the three days.

During the same time, the Media Convention Berlin is being held at the same location — a kind of twin conference — which is closely connected with re:publica and included in the admission ticket, but it is still considered a separate event. The additional focus on media makes sense: after all,  the media industry seems to and actually does make up the largest group of visitors according to official numbers.

The Bavarian and Munich media industry is also represented in Berlin. The Media Lab Bayern, MedienNetzwerk Bayern and Team of Excellence for Culture and Creative Industries, City of Munich are sharing a booth in the main hall. Those who are game have the opportunity to search for five different bottles in a ball pit. The bottles contain notes that create a unique business idea for a media startup when combined. You might call it a random startup generator. 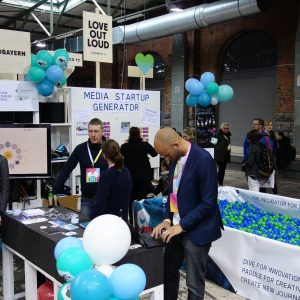 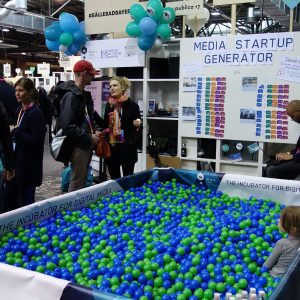 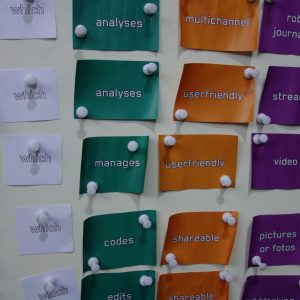 The previous re:publica and Media Convention events boasted prominent speakers. That is also the case this year: at the beginning of the conference, Can Dündar, the former editor-in-chief of Cumhuriyet now living in exile in Berlin, called for solidarity with imprisoned journalists. The first day also featured human rights activist and former chess grandmaster Garry Kasparov, ZDF anchorman Claus Kleber and Minister for Economics Brigitte Zypries.

Kasparov works intensively with artificial intelligence, human-machine interaction (this might conjure up images of his legendary games of chess against the IBM supercomputer Deep Blue) and stands up for individual human rights in his work for the Human Rights Foundation. In essence, he embodies many of the core topics of the conference. The large number of those wanting to hear his speech came then as no surprise, as it addressed the role of free information for democracy and the current role of propaganda in totalitarian regimes. He held a small preliminary press conference  along with Ondrej Vlcek, CTO of Avast, about connections between cybersecurity and artificial intelligence. 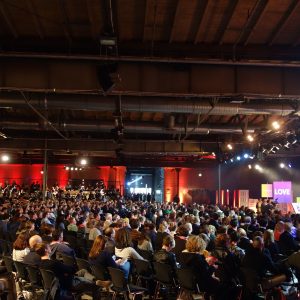 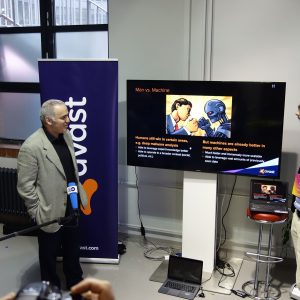 In a kind of “town hall meeting,” otherwise known as an open Q&A session, the still relatively new Minister for Economics Brigitte Zypries addressed the audience. She initially promoted the ministry’s own funding instruments such as EXIST and INVEST and proudly referred to the Digital Hub-Initiative.  In this context, Munich was chosen as Germany’s digital hub for mobility. The Bavarian Minister of Economics Ilse Aigner just recently announced that the Munich hub will also be expanded to include InsurTech. A number of questions came from the audience who expressed their frustration about their city or state coming away empty-handed from the awarding of digital hubs. The minister pledged to account for additional hotspots when selecting hubs in the future. Overall, Zypries seemed open to learning from the startup-oriented audience and promised to see if it could be possible to make EXIST accessible to more target groups than just college graduates.

Zypries’ appearance in front of the startup and digital scene proved that the questions dealt with at re:publica have long since become core topics for a Federal Minister of Economics.

By continuing to use the site, you agree to the use of cookies. more information