The VR fitness startup Icaros has grown out of its office in the university district. Its founders are also heading to Silicon Valley with the German Accelerator. We visited the Munich entrepreneurs in their new digs in Martinsried where they brought us up to date.

The hype surrounding Icaros is still going strong. It seems their fitness devices can be found at half of all tech events — where they have often been put on display by another company looking to get some attention from visitors. The strategy works: you can count on seeing large groups of people and long lines.

We were able to test out the Icaros in peace and quiet in their Schwabing office last summer (featured here) and were instantly hooked:

“It is all harmonious and sturdy. The design is excellent, and the VR experience is both impressive and fun. Most of all, the flight truly requires physical effort. You feel like you are genuinely doing something for your health. In short: the product indeed lives up to its hype.”

A lot has happened for the young company since then, so we learned more from co-founder Johannes Scholl during our visit to their new office in Martinsried. Up to roughly two weeks ago, Icaros was still located in Munich on Schellingstrasse at the Hyve innovation company, which is also where the startup originated. In the meantime, things have gotten too tight for the startup and their current team of 15 employees. Johannes Scholl looks back on their time at Hyve fondly:

“Hyve was the perfect incubator for us. They provided office space and their infrastructure; we were able to communicate with colleagues and got to know their clients. Even though we have outgrown the office, we are still closely linked with Hyve.”

The rapidly growing hardware startup is now in need of more space.  Hyve’s central downtown location had also become an issue. There was no freight elevator for quickly transporting the massive fitness device from the office to trade shows, and it is difficult for semi-trucks to park in the busy Schellingstraße.

The new office just outside Munich offers all the advantages of an industrial park, while also providing plenty of room for continued growth. It basically is a huge showroom with work stations. The startup is able to proudly display previous Icaros designs alongside their latest prototypes. A few other fitness devices can be found right nearby for joint workouts after work. Fitness is part of the company’s DNA.

Images from the new Icaros office: 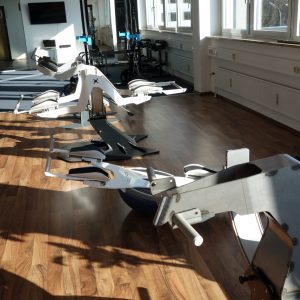 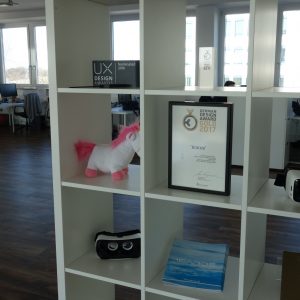 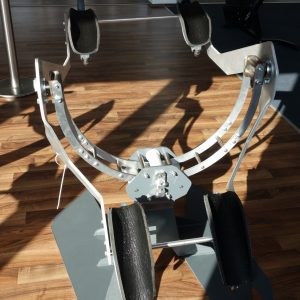 The device is now suitable for use in fitness studios and is called the “Icaros Pro”. In addition to the flight simulator, an underwater world is also now available. The five members of the software department are currently working away on further scenarios. A multi-player mode has also been implemented. A model for home use, which was mentioned last summer, is also still in the works, as are new devices and projects. The founders are anything but short on new ideas.

In addition to the German-speaking core market, Japan has become an interesting market for the startup. The Munich company is also testing the waters in Korea, and was featured at a sports trade show in Seoul.

Taking on the American market might be right around the corner now that Icaros has been accepted by the German Accelerator. They will be heading to Silicon Valley for three months starting next weekend. Both founders will be traveling to California together, and then plan to alternate being on site. Johannes Scholl gave us some more details about their plans:

“We really want to use German Accelerator for networking in Silicon Valley, for getting to know people and establishing a sales department in the US. Potential investments are also a topic, but not a major focus.”

We expect that Icaros will meet up with the same, if not more, enthusiasm across the pond. The startup is definitely prepared: a full freight container load of Icaros Pros is already waiting for the founders in the US.