Fly in virtual reality while working on your own physical fitness – does it sound too good to be true? The Munich VR fitness device ICAROS has been the object of amazement and excitement at trade fairs and events. Hype or genuine innovation: What does ICAROS really have to offer?

A lack of attention is not something the Munich-based company has to worry about at the moment. The company was voted as one of the Top 7 Startups of the Pioneers Festival, received an honorable mention from the renowned design prize RedDot Award, is the Overall Winner of ISPO BRANDNEW, was nominated for the German Design Award and came in second place for the FIBO Innovation & Trend Award. Large companies have been happily investing in branded ICAROS devices for marketing reasons. Samsung demonstrates their virtual reality glasses Gear VR using the fitness device. The Munich startup could be found at the Milan EXPO, at WIRED in London, CES in Las Vegas, the CeBIT in Hanover, SXSW in Austin and at the gamescom in Cologne. Do note that this was all within just one year. So what is the hype all about?

The question answers itself as soon as you are on the ICAROS device. The device moves freely both vertically and horizontally. Your shins and forearms are supported by the device, and you hold your balance using what is known as the plank position with the tension of your own body. In the VR glasses, you fly over a landscape and are able to steer your flight by shifting your center of gravity. Keeping your balance the whole time is real physical work. 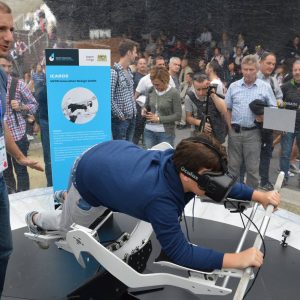 In October 2015, ICAROS presented the prototype it had at that point in time at the EXPO 2015 in Milan. (Photo: ICAROS) 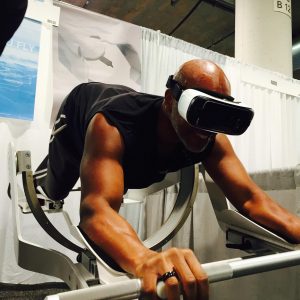 At the beginning of 2016, the VR fitness device was presented at the CES in Las Vegas. (Photo: ICAROS) 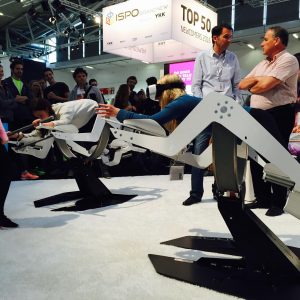 At the ISPO sports fair in January 2016, the company was named the Brandnew Overall Winner. (Photo: ICAROS)

It is all harmonious and sturdy. The design is excellent, and the VR experience is both impressive and fun. Most of all, the flight truly requires physical effort. You feel like you are genuinely doing something for your health. In short: the product indeed lives up to its hype. You might expect to find the same enthusiasm from the device’s inventors.

From a design concept to a functioning ICAROS prototype

The company was founded by industrial designers Johannes Scholl (29) and Michael Schmidt (49). The startup is a spin-off from the Munich innovation company HYVE. Michael Schmidt started HYVE 15 years ago, and Johannes Scholl completed an internship at the agency in 2011. The two already played with an initial concept for ICAROS back then and created the first designs on a computer. Scholl commented in retrospect:

“We wanted to build a fitness device that gives you an extraordinary feeling. For us, that meant taking on the human dream to fly. From a technical point of view, we knew it would only be possible with virtual reality.” 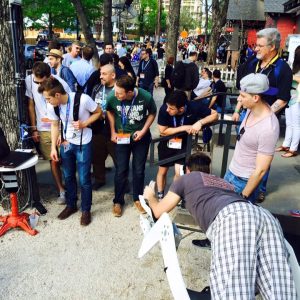 Visitors at the SXSW in Austin, Texas, were able to take a test flight in March 2016 in front of the German Haus. (Photo: ICAROS) 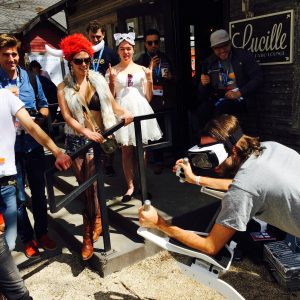 Here, the device is ready for serial production. (Photo: ICAROS)

Actually implementing the concept was not something that the two considered at that point. VR glasses were still a long way off back then. So it became a fun side project for the founders on the weekends or after work. One of the first designs looked more like the Iron Man suit than the device as we know it now, as Scholl explained:

“The first ICAROS was a design concept – future studies. We thought: Maybe virtual reality will really happen someday and then we’ll do it. We never would have thought that things would have come so far just a year and a half later.”

“People were flipping out”

After the first virtual reality glasses were available in a developer version, the founders seized the chance and built a prototype with a previous version of the Oculus Rift. They went public in May 2015 at the digital conference re:publica in Berlin. The response was tremendous – hundreds of visitors wanted to try out the VR flight machine:

“People were flipping out and found it awesome.” 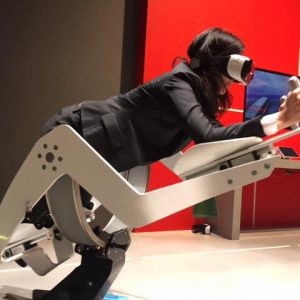 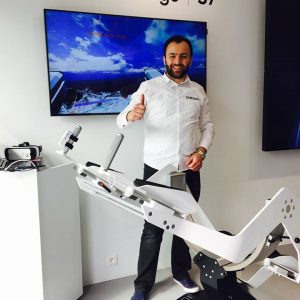 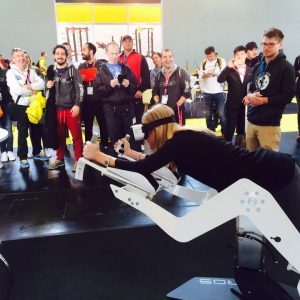 At the FIBO fitness expo, the startup was awarded second place in the FIBO Innovation & Trend Award. (Photo: ICAROS)

After such a positive reaction, Scholl and Schmidt decided to get the device ready for a market launch. To do so, ICAROS GmbH was founded as a subsidiary of HYVE. The founders are reserved when it comes to the exact shareholder structure:

“Let’s just say that everyone is happy.”

The young company was able to get started immediately, as co-founder Michael Schmidt said:

“Working at HYVE meant that we knew the right people. We had the connections and the network to build a product that included extremely complex mechanics plus its own electronics and software. Right from the beginning, we knew who would be printing our circuit boards and who would build the prototypes.”

The network mainly includes established, medium-sized companies. The entire production process takes place in Germany: the devices are manufactured in the Allgäu, the electronics come from Düsseldorf and the casings are from Nuremberg. At the array of trade fairs and events where the startup has presented its prototypes, over 3,000 testers tried out the device, including techies, fitness experts, physical therapists and gamers. Their feedback was incorporated into further development of the product. 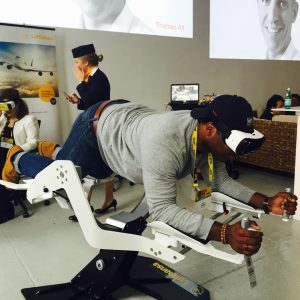 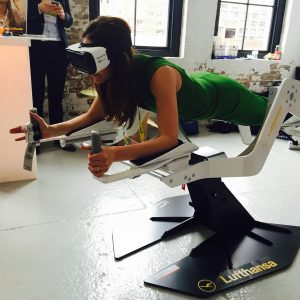 Large companies such as Lufthansa are using the fitness device to keep up with the VR wave. (Photo: ICAROS)

ICAROS has been ready to start with serial production for a few months now. Since April of this year, the company has been delivering devices to customers, especially to fitness studios.

The founders see the future of their company in a growing range of products with devices for various applications, explained Schmidt:

“We have ideas for devices that start at a reasonable market price and go way over 15,000 euros. The amount of physical effort needed for them would significantly surpass that of the current model.”

Fitness studios will continue to be an important target group. At the same time, the startup is also working on a home training version that the user will be able to assemble after delivery. The company is aiming for a retail price of 7,500 euros for fitness studios, and the home training device should cost about a third of that. The game environment is also on the development to-do list. An underwater world is already being planned, as is a platform for external software developers. Both founders are currently testing a new multiplayer mode:

Discussions with physical therapists revealed further applications and target groups: The ICAROS could be used to support work in rehabilitation facilities, for example to mobilize stroke patients or for physical therapy for athletes. Schmidt said that initial tests have started and added:

“We are certainly still experimenting. However, we are not eliminating the possibility of offering specialized therapy devices in the future.”

The sport scientists at the Technical University of Munich currently have a device. They are recording data, and want to measure and quantify the impact of exercising with ICAROS: Which muscle groups are engaged? How many calories are burned? The German Sport University Cologne will start its own testing at the end of August.

The next step is for the team to grow and to step up production of the current device. Demand should definitely not be a problem. We will not be surprised to find ICAROS more and more in the near future in fitness centers, offices and living rooms.