Jeff Burton, co-founder of Electronic Arts (EA), is without a doubt a pro when it comes to entrepreneurship. We had the chance to talk to the Serial Entrepreneur about VR, AR and how he is involved in the Munich startup scene.

Jeff, you got involved with the ABC Accelerator (in Munich since summer 2016). How did you get in touch with the team?

I was initially invited to the 2014 COINVEST high-tech investment conference in Nova Gorica, Slovenia, and was impressed with the number of startup companies presenting who had compelling products and services to offer. Some of the investors whom I met at that conference later became co-founders of ABC Accelerator in Ljubljana. They invited me to participate in a virtual pitch session at the end of their first cohort of startups, and our relationship expanded beyond that. Today, I am on their Board of Advisors.

What do you like about ABC? Why and how do you support the accelerator?

As is so often repeated, the success of any startup or company depends largely on the quality of the team it has been able to assemble. The group of people involved with ABC are just superior. They are ambitious, experienced, brilliant, and kind people who get things done and have a great vision. I try to help them attract the best startups I know in the world, and also I expect to help them become the most prestigious accelerator in the US. 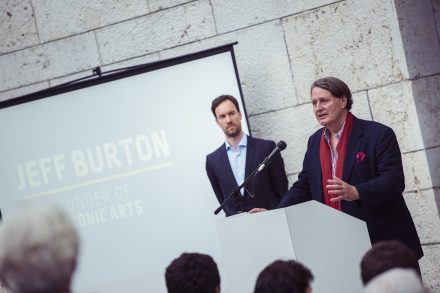 What’s your impression of Munich as a place for technological innovation?

Without intending to cast aspersions on any other part of Germany (Berlin), Munich has the intellectual powerhouses of Germany (LMU/TUM), and really seems to be the center of a great assembly of major corporations who have a particular interest in high technology development. CDTM is the best Study Program in Entrepreneurships that I know in the world.

What’s the difference between startups/founders in the US and Germany?

The differences are definitely beginning to diminish, but in general I would say that German startups tend to begin thinking only about the German market – or at least they believe that they must fully succeed in the German market before venturing beyond. That can take many months or even years, and by that time, the opportunities for going global are much more difficult to achieve, if only because the global mindset is harder to spread throughout the company. Scaling is probably one of the biggest mind-set advantages that the US instills into every startup. The US attitude is somehow more aggressively sales-oriented. Culturally in Germany and most of Europe, it is not considered acceptable to appear to make arrogant claims. In the US, it is not considered ‘arrogance’ if you can actually do what you claim you can do.

What do you as an US investors think about Germany?

Well, I consider it a wealth of resources in innovation, technical mastery, intelligence, and hard work. It also continues to have the best reputation in the world for superior engineering. It remains a model of efficiency and frugality, and the people’s ability to reunite the country is seems very near to a miracle. A great place to invest in the youth of the country.

How does a German founder convince an american investor / VC?

The German founder enjoys an innate advantage with American investors/VCs to begin. The methods of convincing someone to invest differ very little anywhere in the world. One has to have a great team, a great product, and a proof of strong market demand for the product or service. I cannot think of any company that failed as a result of having too many customers/users. Prove huge demand and great execution, and Americans will certainly invest.

In which fields and industries do you see the greatest potential for disruptive startup companies in the coming years?

I find myself convinced now that over the next 10-15 years developing predictive data science will be the most valuable capability present in every startup company, whether B2B or B2C, regardless of industry or field. Data is disrupting every single legacy industry. It involves machine learning and AI, but there are now ways to make what previously appeared to be nothing but random events become very predictable patterns that every business must master.

Last but not least: Which video games are you playing lately? Any VR experiences yet?

Good question! I am 66, involved in many different things, and no longer play any video games. I am fascinated by the apparent possibilities of AR in video games, and while I love the experiences I have had with VR, that remains fraught with extremely difficult problems to overcome that involve human brain neurons and some basic realities of physics. I think it will be quite some time before those are resolved.