We all remember the red, white and green ones from when we were kids. But blue? And watermelon and grapefruit instead of apple and lemon? These special gummy bears were the result of an innovation process involving thousands of participants that was managed by Munich-based startup innosabi.

Faster results in a networked age

of innosabi’s clients are well known: major companies such as Kärcher, Postbank, 3M and Continental. They realized that innovation cycles are speeding up, which means that product development also needs to happen faster. The companies themselves have to adapt the way that they develop products to account for digitization while also making their processes more agile, networked and open.

The power of crowd innovation

The four innosabi founders met while studying in Munich. They noticed how scared large companies were of digitization, as well as the opportunities presented by agile crowd innovation. This prompted the founding of innosabi in 2010 by Jan Fischer, Moritz S. Wurfbaum, Catharina van Delden and Hans-Peter Heid.

Their crowdsourced innovation software brings dedicated people together in a virtual space where they can discuss their ideas – and this collaboration generates innovation. The results are then implemented as a market-oriented product or service. One example is the “Goldbären Fan Edition” – the special gummy bears for the last football world cup –, with its new flavors and different colors. Another is online banking that is truly user-friendly, with new features that have been developed in collaboration with the clients themselves.

“I would like our platform to be the digital home for innovation projects in large companies.”

This will be the scenario in five years if it goes according to the plans of innosabi CEO Catharina van Delden. To achieve this goal,

Then big data algorithms should process the results. This is where things really happen, commented the innosabi executive.

And how did the founders get to where they are now? Catharina explained: 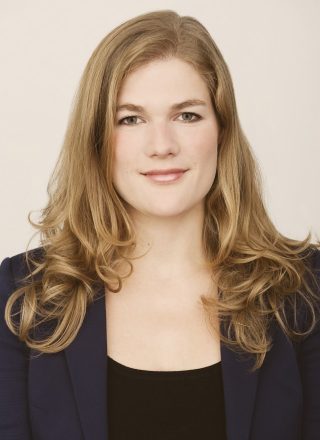 “One of our key factors for success has been the diversity in our team.  That is what made our company possible.”

What everyone in the team of founders shared was a strong will to start a company. Plus, they are all alumni of the Technical University of Munich. That being said, each of them studied in a different field – with mechanical engineering, finance, electrical engineering and marketing, they have a bit of everything to offer – and the four founders are also quite different when it comes to their personalities. Some are more into networking, while others are more analytical or an expert in sales.

One of the biggest mistakes that a founder can make is keeping their idea a secret. The innosabi founders talked about their plans and goals from the very beginning.

“That made it possible to convince a large number of people to help us – based on a kind of intrinsic motivation. Our advisory board is high-caliber. Everyone on the board wants to support us, and they do not earn a penny doing so,“

It is true that all of the founders studied in Munich and that some even come from the Bavarian state capital. However, their network was not a given from the start. Developing good contacts was a gradual process that the four founders pursued by attending selected conferences and by following a specific rule: “We cannot be seen together! Each of us has to go out on their own and talk to as many people as possible!”

Their mentor from the very beginning, CEO of IMAN Solutions GmbH Alexander Lang, assisted them in networking as did the other board members, Barbara Wittmann, Dr. Stefan Ried and Dr. Markus Pfeiffer. Catharina has also been championing the interests of startups for several years as a member of the Bitkom Executive Committee. This was definitely the biggest step in expanding her network, particularly on the executive level in large companies.

The founders also sought out additional support – for example from Manage & More, an MBA in Innovation & Business Creation, an Exist Grant and the Startup Unit of IHK. The innosabi team wants for nothing in Munich. After all, founders have to be able to focus on their business – and no city is better than Munich when it comes to B2B.

So everything is covered? When asked about their financial situation, Catharina commented that she had been living in her student digs until recently:

“We are the biggest bootstrapping champions that Munich has ever seen. And it also took us quite a few rounds to get to where we are today.  Two of us are developers. That let us try out a lot on our own without falling flat on our faces and throwing away hundreds of thousands of euros.”

So far, the company has grown with two strategic angel investors and without any additional borrowed capital. Before bringing in external financing, the founders wanted to first properly understand their clients, the marketing concept, their product and the market on their own and to have “proof that the concept works,” remarked Catharina.

innosabi and its next growth spurt

Now innosabi has reached that point – “We have phenomenal case studies, we have an exceptional product and we have satisfied clients,” said Catharina. Today they are putting their full attention on scaling up their business and on international growth. The focus is particularly on partners who also understand the product and are not afraid of B2B situations with longer product cycles.

Munich Startup is excited to learn more and wishes innosabi the best of luck in the future.

By the way, innosabi is looking for enthusiastic new team members — developers, of course, and currently also a student trainee in marketing.