Ready for an adventure in virtual reality? We visited the “GameDeck” by Reality Twist GmbH in Munich and were able to get a first impression of what the current technology has to offer and how far you can dive into virtual reality (VR).

In the GameDeck, a room where the game environment is projected onto its walls, visitors experience a combination of an escape room, 4D film and an adventure game. The current prototype of the game, which is intended as a team challenge, is based on the film adventure “Mara und der Feuerbringer” (Mara and the Firebringer) which is based on a trilogy of novels by Tommy Krappweis. The founders Clemens Hochreiter and Thomas Wagner have been working in close cooperation with the author and director, and use the original dubbed voice from the film to guide the players through the game.

The GameDeck is based on a modular room concept that can be used to depict small game decks or large dungeons. Up to five people per team are directed through various rooms with a playing time of approximately ten minutes per room.

A room is composed of various standardized modules. They can be combined as desired to easily create new rooms. GameDeck intentionally uses projectors instead of VR headsets, since the founders see key advantages based on the current state of technology. The main factor is allowing for natural interaction among members of a team. It also makes it possible to play without special equipment, which keeps the costs at an acceptable level. Another aspect is that VR headsets can make many users feel nauseous.

So how do you play the game?

Each player is tracked and analyzed in the GameDeck using time-of-flight cameras. The data is transmitted to what we call the GameDeck Engine. This makes it possible for the players to perform actions using movements and gestures. For example, secret messages that are hidden in the walls can be revealed using a virtual torch. Touch sensors make it possible to precisely recognize input. In the same way, movements can be used to take control of a fast-paced ride through a river of lava and to steer around obstacles. 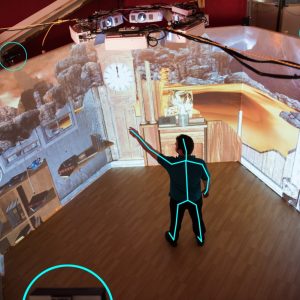 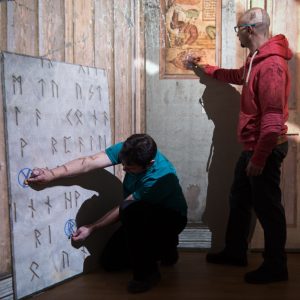 In addition to virtual objects, real props are also used that are hidden in the room. In the current prototype, players have to find runes and hold them up to the proper points on the wall to decode a secret. The runes are recognized in the walls by RFID sensors.

The boundaries between virtual reality and the real world are constantly blurred, for example with special effects such as fire, fog or wind. This turns the gaming experience into an exciting combination of VR and real life.

On the Lookout for Investors

The GameDeck project is funded by the Film Fernsehfonds Bayern (FFF) and is also supported by Kultfabrik München, Microsoft Deutschland and Tommy Krappweis. Both Clemens and Thomas hope to work with filmmakers and to participate in cooperative ventures with theaters in the future to be able to offer additional adventures as games. Which Lord of the Rings fan would not want to stroll through the Shire with Frodo and friends while making their way to Mordor? Since the wherewithal for future projects is a must, Reality Twist GmbH is currently looking for investors.

We wish them the best of luck and are already excited to learn about future gaming experiences in the GameDeck.