The Munich startup Barrio connects parents planning playdates with a match-making app. Barrio got started a year ago and the young company is as busy as a playground when the weather is perfect. Our seven questions for founder Melanie Epp.

Barrio has three entrepreneurial “parents”: Tanja Schultz-Langerhans has a daughter and is responsible for our finances. Dachshund-dad Lars Mielke takes care of all things technical. And I, Melanie Epp, am the actual Barrio “mom”: mother of three, in my second marriage, communication and media graduate with additional studies in psychology and business administration. Until 2016, I was head of a communication unit at Allianz and set up a children’s fashion label at the same time. In April 2018, my youngest entrepreneurial baby hit the market: “Barrio – the parents’ hood.”

With the app, moms and dads can arrange playdates for their kids. Barrio already asks about initial interests during registration: Do you like hiking or indoor playgrounds? Cooking for yourself or going out to eat? Plastic or wooden toys? Every user creates a profile and introduces themselves and their kids. The information is meant to introduce parents with very compatible interests to one another. The matching function initially accesses the information from the questionnaire. If used for a longer period of time, it also links to the app’s digital magazine and compares reading and like patterns based on the editorial content. That’s how the app connects families with similar interests and approaches to raising kids. 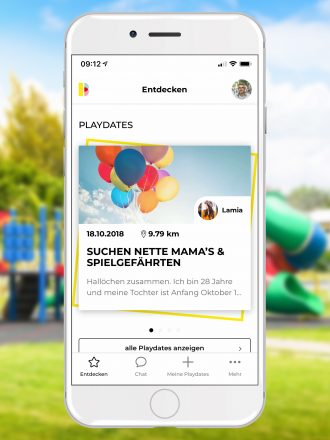 Nope, it’s only been around since April 2018, to be precise. That means our “baby” just celebrated its first birthday. Barrio is not only the first, but is also still the only app in the German-speaking world that connects parents in real life this way.

The Barrio community has grown to more than 30,000 users in one year. In the past twelve months, there have been more than 1,500 playdates across Germany that were arranged by parents using Barrio. And that number is increasingly daily: The app shows more than 100 playdates every day! For our integrated digital magazine, we work with roughly 30 freelance writers, who have published more than 400 articles so far.

We love and live by Bavarian Gemütlichkeit. Munich unites the best of both worlds for us: You have a major city on the one hand, and then the flair of a big village on the other. The proximity to an international airport and the Italian border are significant locational advantages both in personal and business terms. The quality of living and the calm, less hectic way of life is beneficial on all fronts: for your job, your family and the balance between the two.

Barrio is growing on its own thanks to our users. After the first few days in April, 2018, we had registration rates that we hadn’t planned to see in our forecasts until after several months. That development continued in the months that followed — and we’ve adjusted our forecasts upwards to follow suit.

That’s easy. Barrio is a Westend-baby. We’re loyal to our hood!