2018 was a record-setting year for VC investments in German startups, and Munich startups also received a big piece of the pie. That makes it high time to learn more about the Munich investor scene, its VCs and its business angels. Founders who are just getting started or are new in Munich will find an overview here.

In Bavaria in 2018, more than 200 companies brought in venture capital amounting to 1.4 billion euros according to the figures reported by the German Private Equity and Venture Capital Association (BVK). In terms of the number of companies financed, Bavaria remained forerunner with more than 230 companies. A study by the consulting firm EY also views Munich as one of the top locations for raising venture capital.

So the first question about the “Munich investor scene” is: Do venture capital companies and business angels have to be located in Munich for the local ecosystem to benefit? The answer is: No, of course not. After all, strong startups always find interested investors. Barbod Namini, Partner at Holtzbrinck Ventures, commented:

“Professional investors take the city more than serious and strong entrepreneurs have consistently been able to attract both local as well as international top tier investors.”

That’s something the figures from High-Tech-Gründerfonds (HTGF) for Bavaria and Munich also demonstrate: An investor doesn’t need to be located in Munich to be interested in its local startups. So far, Bonn-based HTGF has invested more than 617 million euros in a total of 92 companies that have their headquarters in the Bavarian capital. 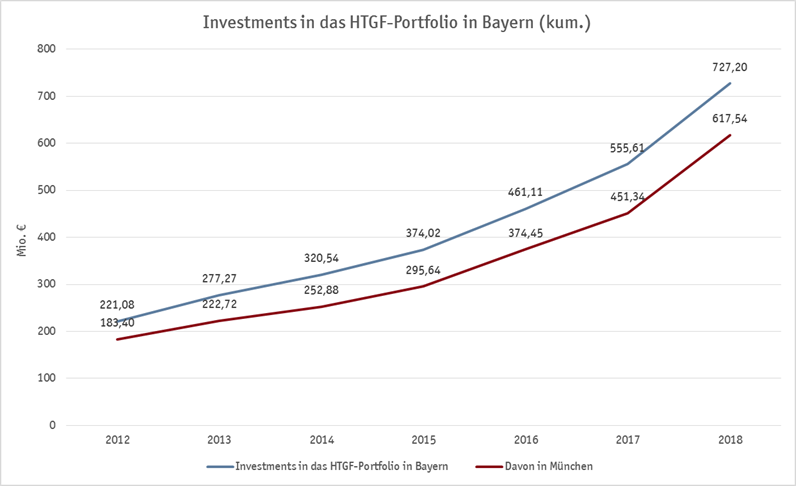 That demonstrates that having tons of local investors in Munich isn’t strictly necessary for startups. That being said: An efficient ecosystem not only has a close network of startups, corporates, politicians, talent, research, mentors and many other players, but is also networked with investors.

So what does the Munich investor scene look like? In Munich and its surroundings, more than 40 listings are included on our map with the label “Investor”. From A for Acton Capital Partners to X for XAnge. The group also includes larger VCs that have their headquarters in Munich like Acton, Holtzbrinck or Target, as well as Alstin, the investment company of Carsten Maschmeyer. There are also companies like Speedinvest from Austria, Ventech from France or Earlybird who also have a branch in Munich. Further VCs such as Kurma Partners from France, Occident from Switzerland or the investor network Prime Crowd just recently opened their own offices in Munich.

Investors with a specific focus

Munich is also outfitted with investors that have a specific focus. Some examples are Ananda Ventures and BonVenture, which focus on social enterprises, or AM Ventures for companies involved with 3D printing.

Another special feature is the presence of local investment firms of large companies such as BWM i Ventures, Fluxunit of Osram or SevenVentures, the investment arm of the media group ProSiebenSat.1. They are joined by countless business angels who, most often based on their backgrounds, invest in all sorts of industries and technologies. The exact number of angels located in Munich, however, will probably remain a mystery. We’ll get back to that later.

“When it comes to startups and VC in Germany, Berlin is naturally paid attention to first. Certainly a reason for that is because the capital city and its players are a bit more vocal and animated in how they present themselves. But I don’t think that investors underestimate Munich as a result.”

For Wossagk, Munich is also one of Europe’s most important tech hubs. Being close to industry and renowned universities like TU and LMU ensures a high standard of education and provides many young, motivated founders, said the investor. He explained further:

“Some of the most experienced VCs in Germany are also located here. Founders realize that quickly and consciously look for capital in Munich as well. From our perspective, the location offers key benefits – for example, having some distance from Berlin isn’t always a bad thing to be able to discern between substance and hype.”

Financing networks that serve as an intermediary are particularly helpful. The best known local player in this field is BayStartUP, because their investor network is made up of roughly 300 private investors and more than 100 institutional investors. In the 2018 financial year, BayStartUP brokered 62.7 million euros of startup and growth capital in a total of 50 financing rounds. Last year, the network also incorporated about 40 new business angels in its network.

Another helpful point of contact is Munich Network, which not only networks startups with SMEs and industry, but also with investors. In addition, Alphazirkel brings startups together with its SME network – the range of roughly 5,000 family businesses includes investors as well. There are also different networks that focus on specific sectors: The Bioangels have a match-making format specifically for life sciences and healthtech, while the ESA Business Incubation Center maintains close contacts to investors in aerospace. There are also some smaller scale intermediaries.

Something else worth mentioning here are government programs for funding startups. It’s also worthwhile to meet with Bayern Kapital, which is a venture capital investor company of the State of Bavaria that supports innovative high-tech companies in Bavaria with venture capital. Bayern Kapital is a subsidiary of LfA Förderbank Bayern and offers consultation days in conjunction with High-Tech-Gründerfonds. The dates are coordinated by BayStartUP. The Bayerische Beteiligungsgesellschaft (BayBG) should also be mentioned as an important player considering that they’ve reported to have invested in about 30 percent of all local startups (here’s more information about how startups can access capital through BayBG and what makes BayBG different from other private VCs).

Now back to the business angels. In this area in particular, the Business Angels Netzwerk Deutschland (Business Angels Network Germany or BAND), is trying to foster more transparency, communication and cooperation. Then you have the “MunichAngels,” a group of Munich business angels that invites startups from the most varied fields to pitch their ideas during dinners that are held on a regular basis. Lists are also available, such as the Angel List Blogs. The website aims to give a regional overview (the blog only manages to do so to a limited extent, as this tidbit demonstrates).

Business angel Florian Huber gave us some insider information. He said that when he was looking for funding years ago as the founder of United Domains and Neubau Kompass, contact information about the few active business angels was handed over secretly. A startup community didn’t exist back then. That is fortunately something that has changed over the last few years. After Berlin, Huber considers Munich to be the most dynamic startup location in Germany that now has a multitude of active business angels and VCs. When asked about transparency, Florian Huber, who was voted the 2018 “Business Angel of the Year”, did say that:

“The startup financing market – especially in the seed stage – has a great lack of transparency.  Investors and startups usually find each other through personal networks.” 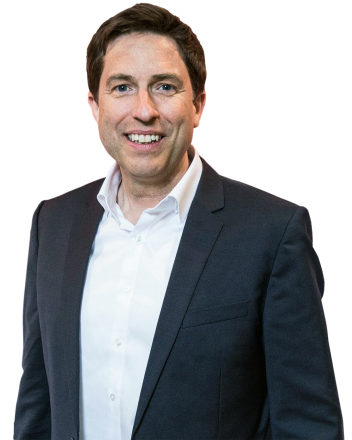 For business angels as well, he thinks less “black box” and more transparency are important, which is why Huber has done his part to improve the situation from his point of view. He explained:

“I’m one of the few business angels in Germany who lists their investments — including exits and failures — transparently on my website. Moreover, with www.chain.de, I’ve established a list of all blockchain startups and blockchain investors in Germany to provide more market transparency.”

It’s an initial step that — if followed by more angels — could provide greater clarity.

A lack of transparency — for everyone involved

When it comes to financing, there’s a general lack of transparency for everyone involved. Just as startups often don’t know which investors in the scene are looking for investment opportunities, startups also don’t go out and announce to the world that they’re in desperate need of money.

That’s why startups should invest their time in good investor relations from the beginning. It starts by becoming familiar with the customs of the industry. It also means nurturing existing contacts with suitable VC investors and understanding how financing rounds operate. A possible way to establish initial contact could be by visiting the right events or going to pitches.

Munich events with a high concentration of investors

Particularly for Munich and startups in need of funding, we would like to highlight some events with an unbeatable concentration of investors. The Cashwalk is a biannual event organized by the LMU Entrepreneurship Center (LMU EC) — anyone who is looking for funding and investors as a startup should not miss this pitch event.

The Munich Investment Forum is just as interesting and is an annual event organized by Fraunhofer Venture and LMU EC, SCE and UnternehmerTUM. And for anyone who would like to regularly meet up with VCs, the regulars’ tables of the “Venture Capital Club” might be something to check out. In this case, it’s also possible to sign up as a non-member.

Worth its weight in gold: Being introduced to a VC personally

Barbod Namini from Holtzbrinck Ventures also thinks it’s important to get to know strong startups as early as possible. What helps him in addition to data-driven sourcing is the array of conferences and tech meetups that have become established across Europe in recent years. That being said, tips from his own network are still the most important source for him. And that is probably the case for all other investors as well.

That’s why personal introductions to a VC are the best way for startups to become (financially) successful. They could be introduced through other startups they know. However, it’s much more helpful to make personal contact through accelerators or by participating in pitches and competitions like the Munich Business Plan Competition. Startups should avoid making “blind” inquiries without previous contact with investors, said Carsten Rudolph, Managing Director of BayStartUP:

“I would not recommend that any startup contact any VCs “blindly” without previous contact. The scene depends very heavily on personal references. So try to get in touch with VCs through a personal recommendation! That would be the best possible approach for a startup.”

Transparency in all matters?

Rudolph also advises every company to be very careful about who they trust when discussing financing issues or details about their business idea. This aspect was also mentioned quite clearly by Boris Hardi, founder of Capmatcher and a business angel:

“Transparency in fundraising is only good if you as a startup have control over which information will be given to whom.”

Hardi does think, however, that transparency is important for the general exchange of information between players:

“When it comes to the industry and the community, transparency is certainly good and important. Startups can exchange information and also casually meet up with VCs and business angels.”

Providing clarity and an overview of the local investor scene — that’s exactly our objective with this article, which is meant to serve as an introduction to the subject. If you would like to delve deeper, our map gives you an overview of the registered investors (also available as a list). In our many interviews, investors like Munich Venture Partners, Senovo and Tiburon give invaluable insights into how they function and let us know what they think is important, how negotiations are held and which events you can attend to meet them.