The Munich startup Blickfeld was founded in 2016 and builds LiDAR sensors, which can be used for autonomous driving or IoT applications. Their seed financing has already brought in a 10 million dollar investment. What’s innovative about the technology, and why is there such a major hype at the moment? We spoke with co-founder Dr. Florian Petit.

The Munich startup Blickfeld develops innovative LiDAR sensors. The founders have already applied for 18 patents for their developments and have received multiple awards, including the Autonomous Traffic & Logistics Innovation Award 2018. The startup also managed to secure seed financing that was raised from 4.3 to 10 million dollars in late August.

LiDAR stands for ‘light detection and ranging’ and is a method for optically measuring distance and speed. The system is not exactly new. LiDAR was actually invented in the 1960s shortly after lasers were introduced. An intriguing bit of information: The founder relayed that astronauts used the technology during the Apollo 15 mission in 1971 to map the surface of the moon.

Particularly in recent years, however, many experts have realized the technology is also ideal for self-driving cars and Industry 4.0. That was something the young company recognized early on. Florian Petit said:

“Now it’s a matter of making this complex technology robust, small and cost-effective to make it suitable for mass markets. The challenge is not to build one, ten or 100 LiDARs, but rather 100,000, one million or ten million – that is Blickfeld’s goal.”

LiDAR sensors are basically eyes for robots and autonomous vehicles

Now the systems are being used in autonomous vehicles, IoT applications and robots. For intelligent machines, LiDARs are basically the same as eyes for people. That being said, the construction of existing LiDAR sensors is too complex and not robust enough, which leads to high prices and frequent failure, explained Florian Petit. He clarified:

“We’ve significantly simplified LiDAR construction and reinvented a core component. Our innovation is based on a micromirror that is made with semiconductor technology. It’s made completely of silicon on wafers, which means scalable manufacturing is possible and allows us to build a very small and high-performance ‘solid state’ LiDAR.”

The serial entrepreneurs are in high spirits

Blickfeld was founded in 2016 by Mathias Müller (electrical engineer and physicist, 37), Rolf Wojtech (software engineer, 37) and Florian Petit (robotics specialist, 35). The three founders have been friends for many years. With fos4X, Mathias and Rolf had already collaborated to establish what has become a very successful startup with 50 employees and has reached its break even point in the field of optical precision metrology for wind power systems (read our success story about fos4X here). The founding trio came together two years ago and decided to establish Blickfeld.

The three Munich natives are in high spirits. Blickfeld has grown to 30 employees and has paying customers in the automotive and IoT industries that are testing Blickfeld prototypes and developing them for serial production.

Will Blickfeld become a unicorn? 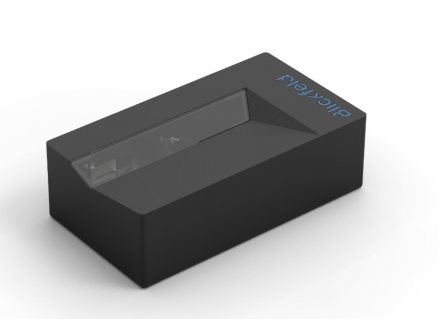 The young company is building its success on three factors: the idea, team and timing. We asked if their good idea combined with the right timing and a strong team might turn into a Munich unicorn. Robotics expert Florian is optimistic because the target market is very large and the technology, said the founder, is unique. He explained:

“Particularly in the field of autonomous driving, a major hype has exploded around LiDAR. There are also countless possibilities for using LiDAR in IoT applications that might not seem so obvious to begin with, such as in the field of smart city, security or maintaining industrial facilities.”

When talking about robotics or IoT, a question that continuously comes up involves the right location for a startup. Is it better for a tech startup with their focus to be located in the US, or is Munich actually a better place to be? A plus point for Munich is certainly the large number of skilled professionals. Blickfeld has particularly benefited from the well-trained engineers from the Technical University of Munich (TUM). The good network and multitude of good OEM contacts in the automotive field also have the founders convinced. Florian also added:

“The world’s best robotics experts and automotive companies are from Munich, Germany and Europe. A lot of people naturally also talk about Silicon Valley, where we were also active to a certain extent. But we also receive applications from there and many inquiries – a lot of people are coming back here. We think Munich is the perfect location for our subject.”