The company Mynaric is one of the biggest, if not the biggest player in the field of laser communication for airplanes, high-altitude platforms and satellites. A successful IPO in 2017 brought in the company, which is planning to take the internet above the clouds, more than 27 million euros. Analysts consider sales in the mid triple-digit million range possible by 2022.

Mynaric was founded in 2009 by former employees of the German Aerospace Center (Deutsche Zentrum für Luft- und Raumfahrt – DLR). The founders included Dr. Markus Knapek and Joachim Horwath (both are now on the management board). Both spent many years researching the underlying technology at DLR. The concept of laser communication had already been researched at DLR since even then it was apparent that radio frequency technology alone would not be enough in the future. In 2009, the founders then took the leap with support from DLR Technology Marketing and started their own company to achieve market maturity and commodify the technology.

The company currently has more than 80 employees and plans to have 100 by the end of the year. Mynaric currently has a total output of roughly 3.2 million euros (as of 2017). In addition to sales, this figure also reflects initiated production and funding, providing more insight into how the company is doing than just sales alone. Sales amount to approximately 1.6 million euros (as of 2017).

“No one in the world has been able to recreate what we were able to do!”

The Munich company reached its first important milestone in 2011, which was when a stable connection was made for the first time between an airplane and the ground. The aim was to overcome unfavorable conditions such as great distances and high speeds.

“That means 1 gigabit per second over roughly 40 miles from an airplane that’s moving at more than 465 miles an hour, vibrating heavily, making turns, etc. A lot of people thought it was hopeless to use technology like laser communication in such a harsh scenario. After all, the narrow laser beam has to remain constantly and precisely aligned with the airplane from the ground station. To give a better idea: Our systems are so precise that they can follow a coin falling out of your pocket from more than half a mile away. That test went quite successfully. No one in the world has been able to recreate what we were able to do.”

In 2013, the first big job came in from the US from a client who was interested in the first commercial end use. That played a major role in setting the course for the Munich-based company. Just a year later, test campaigns were successfully completed in the US. It’s now known that Facebook is also one of the Munich company’s customers. in 2017, they decided to go public: Mynaric collected more than 27.3 million euros of growth capital on the Frankfurt Stock Exchange. If you add a few more financing rounds, the total adds up to almost 40 million euros. Because the founders and existing stockholders did not give up any company shares, it was possible to use the money exclusively for company growth. 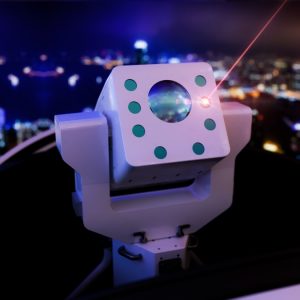 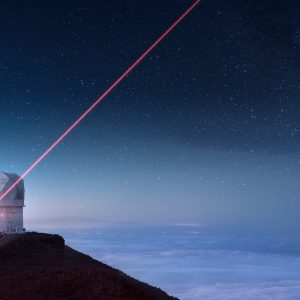 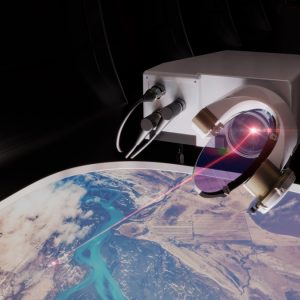 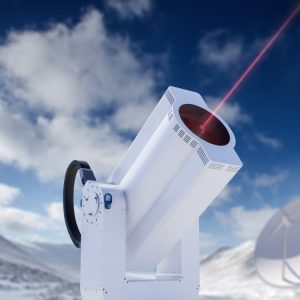 So where is Mynaric’s technology being used?

“Generally speaking, fields of application can be found anywhere where large amounts of data need to be transmitted between airplanes or satellites, of from these platforms to the ground. In particular, a whole series of international companies are working on an internet above the clouds, and laser communication is a key technology for doing so. That’s where several hundreds to thousands of airplanes, drones, balloons or satellites are to be interlinked to provide internet access where fiber optic cables in the ground are not practical or simply too expensive,”

That would also make it possible for economically weaker regions with a low number of inhabitants to access an affordable network connection in the future. Believe it or not, but when it comes to particularly rural and remote regions, there’s talk of three billion people without an internet connection. Nonetheless, Mynaric’s clients of course not only have social interests, but also economic interests with an industrial focus. In these cases, the focus is on applications for ships or airplanes that transmit machine data in real time.

An internet connection as self-evident as having air to breathe

If Mynaric’s technology is as superior to others as it seems, the question is whether it will at some point completely supersede existing communication networks. The company expects a combination of different network technologies to prevail over the long run. Underground fiber optic cables will be used in cities in the future since the technology is able to handle extremely high data rates. In regions with fewer residents, networks in the sky or space will prevail because they are more efficient.

“The end user won’t worry about what network is being used to handle their data in the end anyway. We’re talking about a future in which being connected with the internet from every single place on earth will be just as self-evident as having air to breathe. On top of that: Even in the vacuum of space, we’ll have an omnipresent internet connection.”

In essence, there were two key motives behind going public in 2017: on one hand, they considered it a good avenue for collecting enough growth capital for the company growth they had planned for the next few years. On the other hand, the founders mentioned that going public and the transparency and professionalism it involves mean that large enterprises, which belong to the potential client base, look at you very differently. Connecting three billion people is an ambitious and cost-intensive project that will presumably cost several hundred million or even billion euros. Going public minimizes risk for potential partners.

The company has quite an optimistic view of the future:

“Forecasts look amazing. We’re one of the few credible, if not the player in the international market for laser communication for airplanes, high-altitude platforms and satellites, which is exactly the technology that extremely large tech companies need to implement their plans. That means high sales volumes are possible on one hand – analysts are confident we’ll achieve sales in the mid triple-digit million range by 2022 – and on the other hand, phenomenal strategic value is created by the role of having the key technology.”

Mynaric is expecting that networks in the sky and space – based on laser communication – will play a similar role in the future to that of underground fiber optic networks now: That would make it an enabling market, that will make an entire ecosystem of services even possible in the first place.  For orientation:   The market for fiber optic cables and the relevant equipment translates into roughly 16 billion euros annually, but also makes the entire telecommunications market possible, which generates roughly 1,600 billion euros each year.  Markets that will become possible in the first place thanks to ongoing digitization and connectivity are not even included in these figures.

“A giant ecosystem is emerging and our intent is to basically be the shovel supplier for this gold rush,”

Back when the project was just getting started, however, it was a matter of having to convince quite a few skeptics first. For the first investors they met with, the idea was too big, too far out there and literally too “spacy.” As a result, notions of the company’s valuation were and still are quite varied. Nevertheless, Mynaric is well on its way and has been able to successfully overcome obstacles, such as technical problems or matters such as finding employees, office space and process management. The energy necessary to achieve all that, said the company, should not be underestimated.

The product on its own isn’t everything

The founders also recommend for young founders, in particular engineers, to not concentrate too much on the product and technology:

“That only makes up a small part of what a company needs to be successful. With Dr. Wolfram Peschko, we had an experienced manager from the industry on board with us early on who supports us with finances, production and operative business in general. It’s important to have someone who can take care of all the details from the beginning, ideally as a member of your founding team.”

The company is largely satisfied with Munich as a location. Especially when it comes to looking for well educated professionals, being in the Bavarian capital puts Mynaric ahead of the game in Germany. Young startups are also receiving an increasing amount of support from a multitude of institutions. ESA BIC in Oberpfaffenhofen was decisive in paving the way for Mynaric. But when it comes to venture capital, that’s where they see room for improvement:

“There is no active venture capital community that actually deserves to be called that. In Germany in general, people are much too conservative and focused on numbers instead of investing in potential and future market positions. We’re living in a world that changes so rapidly that you can’t even predict how things will look in the next three years. If I want to invest in the real major market champions in ten years, then I also have to take risks as a venture capitalist. It works differently in the US, and their success proves them right.”