The Munich startup Brabbler is developing a communication platform that aims to ensure privacy for private individuals and confidentiality for companies. It was back in 2015 that the former GMX founders embarked on creating the new company. The company in Munich-Neuaubing now employees 71 individuals from 23 countries. In July 2017, the startup received a significant financial injection — 15 million euros were invested in the young company by the Stiefel family (Media Markt co-founder). We spoke with Eric Dolatre, one of the founders.

How would you explain Brabbler in three sentences?

Brabbler was initiated by the GMX founders Karsten Schramm, Peter Köhnkow and me, Eric Dolatre, as well as our finance expert Jörg Sellmann, to establish confidentiality and privacy in the world of digital communication.

In collaboration with ginlo@work‚ we offer companies efficient team communication with full data security. There will be an app for private users that allows limitless communication – as a legitimate alternative to the free communication services that are financed through advertising and have proven to be genuine data leeches.

An alternative to data leeches

What does Brabbler do better than companies like WhatsApp?

In contrast to free messaging services like WhatsApp, ginlo is based on full encryption. That means our service goes far beyond ‘end-to-end encryption’ – and it is not financed by advertising. That gives both companies and users complete control over their data and the ability to optimally protect that data. As a service that is ‘made and hosted in Germany,’ we are also subject to German data protection laws and regulations, which are among the strictest in the world.

That is an important point. However, safe means of data communication, such as De-Mail have had a difficult time in Germany so far. How do you plan to break into the market?

People are waiting for alternatives. When Facebook disclosed that they share data with WhatsApp, there was a major rush towards services that offer an alternative approach. Also, the comprehensive feedback from our beta phase that we just recently completed shows that private users’ demand for reputable, independent providers is greater than ever.

The right timing for Brabbler 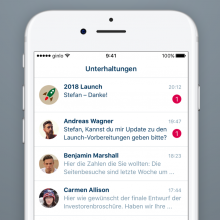 We are also on the eve of the General Data Protection Regulation (GDPR) coming into force, and companies are looking for solutions that will put them on the safe side in terms of legalities without having to give up the advantages provided by direct digital communication.

It is simply the right point in time for what we have planned. We also believe that previous projects were most often too complicated for users. Making it easy for individuals to use who do not have technical know-how is our top priority.

And of course it also helps that we have already managed to establish a service in Germany with GMX – even in competition with dominant players abroad.

So what caused the former GMX founders to come together once again to found a company?

The idea for ‘ginlo’ originated from our own experience as users. All of the free, predominantly US American communication services are only supposedly free. The truth is that you pay a fairly high price – namely the loss of your privacy, since these services collect comprehensive profile and usage data. In some cases, you even sacrifice the copyrights on the data you exchange. That is a far cry from privacy.

At the same time in the business environment, companies willingly hand over their commercial secrets to US-based cloud services such as Sales Force. We believe this situation is caused by a lack of alternatives, which is why we came together once again to found Brabbler AG. We were also able to get Jörg Sellmann on board with our idea as our finance expert. 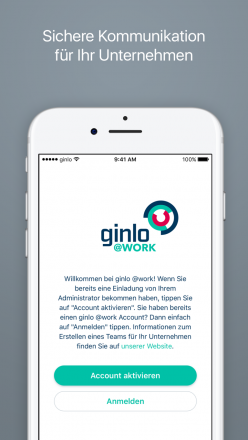 Looking for investors was easier

What advantages do you have as former GMX founders? And: Does having such a grand legacy also come with any disadvantages?

As tried and tested founders, we naturally bring along some experience from our time at GMX. We have also mentored entrepreneurs as Munich Angels for quite a few years. It all taught us how important it is to have a finance professional in your founding team, which is why we are glad to have Jörg Sellmann. Looking for investors for Brabbler was also much easier than it was for GMX.

If you have already been successful in the market, however, then quite a lot is expected of you as a result. That puts a lot of pressure on us compared to back then.

“The startup hype is still going strong in Munich”

If you had to describe the biggest challenge since founding the company, what would it be?

One of the biggest challenges is hiring the right team members. The lack of housing in Munich in particular can often make it difficult to get employees on board. That is why we have also opened a second office in Dortmund.

And how would you describe the startup atmosphere in Germany and Munich?

The startup hype is still going strong in Munich, be it blockchain, healthtech, foodtech or cleantech. New and interesting business ideas are born every day. There are many platforms for founders in my home town that help establish contact with potential investors. As an example, I meet up with dedicated founders once every month as a part of the Munich Angel Dinner.

What do you think is the decisive factor for successful company development?

An idea that is intrinsically motivated, a dedicated team that passionately shares its founders’ vision, and of course market demand to distribute the product.

“A combination of experienced professionals and eager newcomers”

Do you have a secret tip for other founders?

Founders should establish agile processes and implement them in real life. An example would be taking a quick look at all departments every day. It is also important to have the right combination of experienced professionals and eager newcomers, who learn from one another and cooperate closely.

A foosball table certainly helps achieve the latter in the office in Neuaubing, as does the tangible startup feeling in its charming red brick building. Or perhaps it’s the cozy togetherness in one of the container offices in front of the entrance that does it — Brabbler is growing so fast, they quickly needed to create more space. We would like to thank you for the fascinating insights and look forward to learning more about what the future has in store for the young company.