Looking for the right agency is not always easy and can take a long time. As a result, the whole process can end up costing an impressive amount of time and money. You will be able to save that money in the future thanks to Agenturmatching.

The Munich startup was founded by Sophie Schade (30) and Axel Roitzsch (31). The two have been working hard for the past three years to mix things up in the German-speaking agency industry. Sophie earned her Master’s degree in management science and energy economics at the University of Duisburg-Essen, while Axel completed his Bachelor’s degree in media studies and philosophy with a focus on information technology, business administration and media law at the University of Regensburg.

After his studies, Axel headed to Munich in 2013 to work as a management trainee at the fischerAppelt agency. He quickly noticed the amount of time, money and energy being invested in acquiring new customers.

“I thought to myself: this process could be easier, faster and more digital. Sophie and I then designed and prepared a business plan for our platform that eliminates both the time-consuming hunt for partners as well as the inefficient pursuit of new customers – and that was how Agenturmatching came to be.”

The platform connects agencies and advertisers by using a smart matching system. Independent Agenturmatching intermediaries preselect agencies that fulfill the needs of each customer. The customer then receives a shortlist of up to five potential agencies. The agencies that are interested in taking on the project send in their ideas in the form of a briefing.

Axel sees it as a win-win situation for both parties:

“Companies receive shortlists that are perfectly tailored to their needs, while agencies no longer have to deal with unsuited inquiries – that saves a lot of time and money.”

An initial focus on the German-speaking market

The idea is admittedly not new: several international startups function based on a similar underlying concept. The biggest player is Globality in Silicon Valley. The startup launched in early 2017 with 40 million dollars’ worth of funding. Sortlist is the Belgian equivalent. Axel and Sophie initially plan to focus on the German-speaking market, but would also like to flex their muscles in the international realm in the future. They have complete confidence in their company’s potential:

“We solve a problem that costs an enormous amount of time and money in Germany. Selecting the right agency generates annual costs amounting to 1.1 billion euros. If the person responsible for marketing types “Werbeagentur” (German for advertising agency) into Google, 8,730,000 results are shown. Once you have decided on a couple of interesting sites, that is when the real work begins: you have to send out email inquiries or compare prices, services and ideas – the selection process can take up to six months.”

According to Agenturmatching, they send out the requested shortlist in just six days – at the latest. Axel related that more than half of the companies that visit their site are so impressed by the selection offered on the platform that they even forego a pitch.

The biggest challenge for Axel and Sophie is what is known as a “two-sided market.” The founders do not just have one target group to satisfy, but two: they have agencies on one side, and companies on the other. Both have different needs, demands and expectations.

“It can sometimes be challenging to find a solution that pleases both parties – but we are only satisfied if both sides are happy. So far, we have been able to manage our unique situation extremely well through discussion and feedback.” 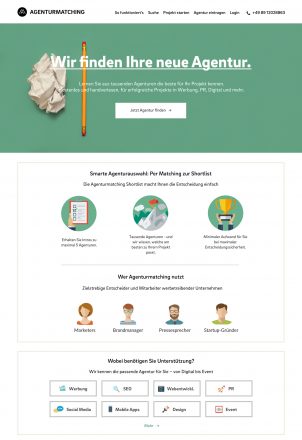 That is something they can confirm with numbers alone: Agenturmatching has generated revenue since their first month, and more than 1,000 agencies have registered on the platform – including advertising and PR agencies as well as branding pros and SEO specialists. A few valuable partnerships have also been added to the mix:

“We are so pleased that we have already been able to make successful matches for institutions such as the German Red Cross and brands like Tom Tailor. Every day, at least one company submits a search request. Agenturmatching also became an official technology partner with the German Association of Communication Agencies (Gesamtverband Kommunikationsagenturen – GWA) in 2016, and we have had the magazine Absatzwirtschaft on board as a cooperative partner since February 2017.”

The founders view their inclusion in the industry-specific magazine as further confirmation of the fact that they are solving a well-known problem in the media industry. They shared that Agenturmatching had generated more than 1 million euros’ worth of agency fees as of the beginning of the year. The team has now grown to eleven employees.

The team is extremely happy being located in Munich. At the Entrepreneurship Center of the Ludwig Maximilian University of Munich (LMU), Agenturmatching was chosen as one of twelve startup teams to receive valuable support:

“That intense and amazing time brought us so far along that we were able to launch Agenturmatching and found Kekulee GmbH in Munich during the same month in 2015.”

The young company is now located in a chic office directly on the Isar River in the Glockenbach district. To clear their heads, the employees regularly head to Lake Schliersee. Sophie commented,

“Munich offers creative places to relax, unbelievable networking potential and – something that is of particular importance to us – Munich is home to a large number of agencies and customers. It all works out really well for us here.”

To boost business even more, the necessary spare change needs to be collected soon; Sophie clarified,

“We are aiming for a seven-figure round of financing this fall in order to promote our growth even further, among other things. In five years, Agenturmatching will no longer be our only B2B matching platform. Our idea – to bring business partners together by using competent matching – is something we also want to transfer to other industries.”

Those who work hard also get to celebrate sometimes. So where does the Agenturmatching team like to go in the world of Munich nightlife? Axel has complete trust in his co-founder’s expertise:

“Sophie checks the DJ sets ahead of time to decide which club we should go to for our biweekly team evening. We often end up at Corleone or Harry Klein.”