Ashoka is an organization that helps social entrepreneurs around the globe spread their ideas. A further objective is to improve the environment for social entrepreneurs and social ideas in Germany in collaboration with Fellows and partners. This includes recognition, funding options and systematic partnerships with public authorities.

Katharina Hinze, the coordinator of the Ashoka selection process, and Rainer Höll from the management team were kind enough to answer our questions.

Improving the environment for social innovation

1. Please tell us a little something about yourselves.

Katharina Hinze: Ashoka finds influential founders who are responsible for new social solutions worldwide and incorporates them into the network of “Ashoka Fellows.” We look for ideas that tackle the root cause of social problems, and for people who change how we view a certain issue.

One example is Ashoka Fellow Frank Hoffman, who trains blind women to become touch diagnosticians for breast cancer screening. In doing so, he is not only improving the cancer prevention process, but is also creating new income opportunities for blind people. He has also changed how we perceive disability – a deficit becomes potential.

Rainer Höll: Ashoka has been active since the early 1980s and has selected more than 3200 Fellows such as Frank Hoffmann worldwide. We have existed in Germany since 2003 and now comprise a team of 16 people who work with 62 Fellows. Our work goes beyond the individual support of Fellows. We want to improve the environment for social entrepreneurs in Germany. 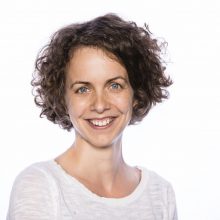 2. What added value do you bring to the Munich startup scene?

Rainer Höll: First and foremost, we hope that our efforts to change the environment also benefit Munich-based social startups. On the level of individual support, we have several local social entrepreneurs in our network. A good example is Michael Stenger, who founded schlaU! Schule to help integrate unaccompanied minor refugees into working life.

We offer young entrepreneurs our PEP program, which supports Munich startups such as Impact Hub Munich, the educational organization Serlo and the “Kuchentratsch” association.

Moreover, we hold a major social entrepreneur conference in Munich every other year. Both of our subsidiaries, Talents4Good and the Financing Agency for Social Entrepreneurship FASE, are also located in Munich.

3. You look for lighthouse projects in the area of social entrepreneurship. What is your aim exactly? Furthermore, what is most important during the selection process?

Katharina Hinze: The key criterion for selecting an Ashoka Fellow is the “new idea”. We want to support people who have found an effective adjustment to make that no one has tried before. With funding and professional support, we want to enable them to continue making those adjustments and to spread their solution throughout Germany. At the same time, we also want to highlight role models who demonstrate how to wisely work for the common good.

Rainer Höll: The most important factor of a new idea is that it changes a system. It might be something like Frank Hoffmann’s idea, which changes our perception of disability. It could also be an idea that frees up entirely new resources.

A current example is our Ashoka Fellow Inge Missmahl, who trains refugees to become psychosocial counselors for other refugees. The demand for counseling is high, and this creates meaningful work for people who come from the same culture and speak the same language.

Financing? Making an impact is the decisive factor

4. To be successful, a social enterprise must …
… precisely understand the impact it has (said Katharina Hinze). What difference do I want to make for my target group? How can I measure my success beyond the number of people reached? Is what I am doing truly leading towards the difference I want to make? This is where I need to critically question and adapt my work. Trial & error are part of the process.

Rainer Höll: An explicit focus on making an impact is also a decisive factor for many supporters. An extremely helpful tool for documenting your own impact is the Social Reporting Standard. More information is available free of charge online.

6. Ashoka works internationally. Is there something that makes the German social entrepreneurship scene different – or even better – than others?

Rainer Höll: The German scene understood really well that success is often only possible through cooperation with the large, existing systems. This includes established welfare systems, health insurance organizations, municipalities and ministries. In Germany, you often do not have to establish detached private alternatives for education or health care. The situation is different in emerging and developing countries.

7. There have been two spin-offs from Ashoka: FASE and Talents4Good. How did the concept arise, and what was the purpose of the spin-offs?

Rainer Höll: As Katharina said earlier, we want to improve the environment for social innovation with our work. As a foundation for our work, we analyzed the hurdles faced by social entrepreneurs in Germany in a 2011 study.

Many social entrepreneurs lack suitable financing instruments and often the right personnel, particularly at the executive level. In collaboration with supporters, our response was to create the financing agency FASE and the staffing firm Talents4Good as spin-offs from Ashoka. They now provide consultation on repayable financing and assist with personnel recruitment.

8. Last but not least: how can people meet up with you?

Katharina Hinze: We do a lot of traveling in Germany. You can find us at larger conferences, such as the Vision Summit, where social startups come together. If you subscribe to our newsletter or follow us on Facebook, then you will also be informed about current events in the social entrepreneurship scene. If someone is interested in partnering with us, we would also be happy to pay them a visit.

Editor’s note: In early 2016, we conducted an interview with VerbaVoice, one of the Munich-based Ashoka Fellows. Read it here.