VerbaVoice is the name of the technology company that occupies a round office building in eastern Munich. Founded in 2009 in that city, the startup developed a cloud-based platform to support hearing-impaired people. 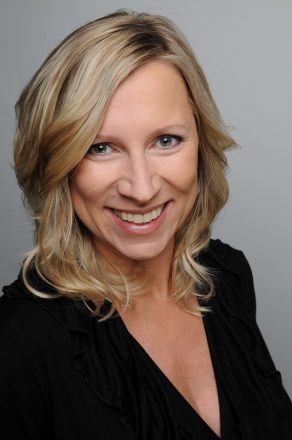 In an interview, Michaela Nachtrab talks about the challenges of entrepreneurship – and of being a mother at the same time.

Michaela Nachtrab developed – together with her present husband and CIO Robin Ribback – an innovative solution for the deaf and hearing impaired. The technology helps hearing-impaired people see content that they cannot hear, virtually in real time.

Text and sign language interpreters can be flexibly switched on via the internet regardless of location – for live event subtitling, on the tablet for students in lectures, with superimposed parallel sign language interpreters on the screen for congress participants or on the smartphone during doctor’s appointments. When asked the somewhat provoking question of whether Siri could do the same job, the dynamic young female entrepreneur answers in the negative – for various reasons, as the conversation will reveal.

“Munich is a very good place to start a business”

Certificates decorate the walls. The Hall of Fame testifies that VerbaVoice has accomplished a lot in recent years. What did the startup do to deserve prizes such as the KfW Award Founder Champion Bavaria, the German Innovation Prize, and the Upper Bavaria Inclusion Prize?

“Munich is a very good place to start a business because there are many grant and support options”, says Nachtrab.

Her path proves it:

“For example, we are from the LMU and received good support not only from the Exist grant but also from BayStartUp. And I found one of our investors, Bayern Kapital, through a workshop in WERK1. The Social Venture Fund is our lead investor, whom we got to know in an event organized by a Bavarian foundation. I can only recommend founders to go to such events so they can take advantage of Munich’s network.”

The VerbaVoice idea originated as a result of her occupation as teacher for the deaf. She repeatedly noticed that some areas were understaffed at certain times. With her solution, the founder counters a bottleneck – there are too few text interpreters in the world. In 2008, Nachtrab wrote the VerbaVoice business plan as part of her MBA studies. 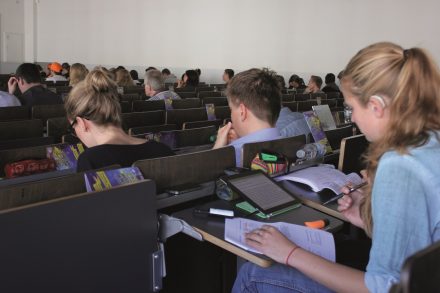 She worked out the feasibility study together with LMU’s phonetics institute. The Exist grant followed soon thereafter in 2009; right from the founding, the money financed prototype development, which Ribback pushed forward in collaboration with external developers in his spare time while he was still permanently employed elsewhere.

Good partnerships are the key

The founder established her initial contacts with investors right away in early 2010, and the first financing round was completed by the end of 2010 – because with a finished prototype and initial sales, the founders had the necessary proof of concept. Since then, several partners are now on board: In addition to Bayern Kapital and the Social Venture Fund, a French investment fund and two private investors have joined them.

“From the outset, plan to have more of a buffer for your capital requirements! That can offset slower growth or delayed technological development.”

In addition to the good network in the startup scene, Nachtrab systematically built up partnerships with existing companies from the start.

“What helped us the most were good partnerships with established companies – whether they were network, development or sales partnerships. Many firms and organizations collaborate with us and we benefit from their know-how and money. Telefónica o2 was there from the outset as telecommunications partner and also sponsored us.”

However, research partnerships with universities, the Fraunhofer Institutes and Sony also help the further advancement of the young company. For instance, VerbaVoice developed a new app for Sony’s Augmented Reality Glasses so the wearer can see the speaker and simultaneously read the spoken word as a projection floating in the room. This system can also automatically translate a foreign language in real time and is thus ideally suited for international conferences.

“There’s nothing like it in the world. Sure, there are still translation errors. Using online conference interpreters, we can also translate it later and transcribe it into foreign languages, but that is naturally more expensive. We are still working on that.”

French, Italian, Spanish, English, Chinese and Russian are already offered as a technical solution for the hearing impaired and people with a foreign language background. Is fiction becoming a reality? The image of the Babel fish from Douglas Adams’ “The Hitchhiker’s Guide to the Galaxy” suggests itself.

A packed appointment calendar but then the nanny doesn’t show up: What is the point of the women’s bonus?

When asked about the women’s bonus, the entrepreneur’s answer is very clear: “I would like to encourage other women to take part in competitions and apply for funding that is especially available for women!”

Every available bonus should be taken,

“…because as a woman, there are also natural disadvantages such as those caused by childbirth and the subsequent time period. That is difficult and a burden because you always have the feeling of neglecting the baby or the company. Most of the time, you think that you have neglected both.”

She was approaching 40 when she founded her company.

“I really enjoy building up something”

She knows what she is talking about: Nachtrab’s children were born in 2011 and 2015, during the startup and buildup phase. Does anyone want this, and can anyone accomplish it? She says, “It’s so much fun for me to build up something, to see how it grows and develops. I can’t think of anything else I would enjoy doing more.” Being a founder and mother at the same time – Michaela Nachtrab radiates so much energy that she seems made for it.

Her tip: “Be a young founder and then have a baby, or the other way around. Being both is very demanding and difficult to accommodate.”

Only by scheduling professional help from a nanny and au pair were Ribback and Nachtrab able to make it during the intense phases when they had to give the company 150% of their time – and with a lot of improvisation talent and juggling skills:

“Your appointment calendar is packed and then suddenly the nanny doesn’t show up. Sometimes I just took my children to meetings. And when the baby was hungry, he did not take the investors into consideration.”

It seems that they took it calmly; after all, there are now several financial backers on board.

VerbaVoice has managed to be both a socially conscious company and a successful tech startup. The company has 60 employees, some of them hearing-impaired – that is embodied inclusion. The company has also produced a few relationships and the resulting children.

And how did it go from sales of 10,000 euros in the founding year to expected sales of 3.5 to 4 million euros per year in 2016? The partnerships, the good network and the investors are part of the answer. Customer orientation, local needs and the unique way to satisfy them also explain its success.

Twelve permanently employed interpreters and an additional pool of 1500 text, sign language, and foreign language interpreters from Peru to Vienna interpret for the currently predominantly German-speaking clientele. In the educational sector, there are legal standards and the corresponding co-financing by state-owned public institutions for hearing-impaired trainees, students and college students, for example. After all, this sector represents 55% of the young company’s orders.

The business also includes events like interpreting the online live stream for the German Bundestag or conferences where public and private organizers obtain support for live visualization (especially with written language).

And what does the future hold?

VerbaVoice is planning to become even more international in the future. For one thing, expansion to other markets outside the DACH region (Germany, Austria & Switzerland) is on the agenda for the next year or two. For another, the focus is on new technical solutions for multilingual situations. Additionally, automation will also be expanded.

“The broad vision is to have a permanent online interpreter for all languages and inclusion in your pocket,” according to Nachtrab. In this respect, the executive team complements itself well:

“I come from the social business realm and think about how I can improve the world, everything that I can do with it. My husband, in turn, is a visionary. He would like visions to become technically possible. If he could finish building the real-life Babel fish tomorrow, he would start the next project the day after tomorrow.”

We are excited about what science fiction ideas will become a reality next.