At the Munich startup Catchys, a lot has happened since our first interview about a year ago: They just successfully completed their second round of financing and won not only the main prize at Bits & Pretzels in September 2017 (a trip to the Tech Challenge), but also the Munich Startup Award. It’s high time for a detailed update. We spoke with co-founder Franzi Majer, who is responsible for finance, sales and product.

With successful financing — investors gave 750,000 euros — the two founders Franzi Majer and Magdalena Oehl were able to take on different subject areas. Relaunching the website, a meta search engine for second-hand fashion, was implemented as the first step. With the first closing of the financing round, Catchys integrated new features and optimized usability for their customers. For the second step, expansion to the UK and Scandinavia is planned. For their third step, the founders are planning a major tv campaign to be aired at the end of the year — ProSieben is one of the startup’s strategic partners.

Both Franzi and Magdalena had already founded their own companies (a food business and TalentRocket). In addition to her food startup, Franzi also founded the German GmbH of Videdressing, a large French second-hand marketplace, and led the expansion of the marketplace as part of the management team. She shared an office with her co-founder back then, said Franzi Majer and commented:

“We realized early on that the market needed something like Catchys. So we bootstrapped and built the product on the side. With the first round of financing — in late 2015 — we stopped working on our old projects and focused 100% on Catchys.“

Their motivation: a need in the market… and a Hermes bag

A second factor to trigger starting a company was an acquaintance who was looking for a specific Hermes bag and came to the founders for advice. The two clicked through every single shop they knew of to help him. That was when the thought came up: There has to be an easier way. And they pursued that thought – with success, since they already generated initial sales in March 2016.

Was it easier for the founders to obtain financing because they already had experience in starting a company? Franzi commented:

“It certainly opens doors for you. But in the end, it’s the idea that needs to be convincing and also the team. What was most important: We already had a certain network. And that really helped us from the very beginning.”

Franzi was also able to impress investors with her comprehensive knowledge of the market. She also knew the major players thanks to her previous experience in management at Videdressing. An additional element in their success is certainly that both founders are very good at networking. Franzi’s tip for finding investors:

“What worked best for me, was to simply speak up and ask. There are so many people who you would never directly think are connected to investors. And then in the end, you find out they can arrange some super introductions. What’s most important is: Don’t focus too much on one area, look in broad terms instead.”

The founder often mentioned as an aside: “Maybe you know someone who’s active as a business angel,” to get “Actually, I do know someone” as an answer. That happened several times and was how Catchys got additional business angels on board.

Classic events are also helpful for finding investors. Franzi mentioned Bits & Pretzels as an example. With their pitch, Catchys won the main prize, and the Munich Startup Award also attracted additional attention. Although many investors already knew Franzi, she said:

“Particularly with business angels and family offices that haven’t invested in eCommerce startups yet, you have to gain their trust first. Prizes like the Munich Startup Award are also extremely helpful for gaining additional trust and getting your foot in the door.”

Is it an advantage or disadvantage being a female founder in front of investors?

Does it help just a little to be a female founder in the world of tech? Franzi laughed:

“That question keeps coming up. I don’t see it as an advantage or disadvantage. Throughout my career, I’ve never felt like I’ve been disadvantaged in any way as a woman. Women should cast off the idea of being a victim. I also don’t think there are any special advantages either – it’s more about the person and the product.”

For the Catchys CEO, the linchpin for success is whether a founder is confident and believes in themselves and the idea. Firstly, the founder needs to be behind the business model and their own figures – only then can they win over an investor, said Franzi and added:

“If I don’t confidently pitch my idea, why should anyone else believe I can bring my business forward? Who will invest then?”

We also wanted to know if they’ve already redeemed their Bits & Pretzels prize for Richard Branson’s Extreme Tech Challenge on Necker Island. The event, however, was rescheduled to take place this October due to Hurricane Irma. Will the founders be travelling there for a vacation? Franzi explained:

“I’ll definitely arrive a few days before the Tech Challenge and take a look at the area around Necker Island. I’m most excited about the program on the actual island – it will definitely be a fantastic networking event that I can really get a lot out of, both personally and for Catchys.”

Extremes are necessary for good ideas

We have a few more questions to conclude and wanted to know: What is Franzi’s biggest talent?

When and where does the founder have her best ideas?

“There are two extremes: Either a solution arises under major pressure. Or I have ideas in a relaxed phase when I’m out walking my dogs or winding down at night.”

And what’s on top of your desk at the moment?

laughed Franzi, but rather a book. You published a book as an internet platform? Yes, that’s also possible with the right network. One of the Catchys investors has a publishing house. And that’s how the startup published the book entitled “Wir lieben Vintage“ (We love Vintage) with two former InStyle editors. With the book, they immediately shot to Amazon’s Top 10 list of fashion books. 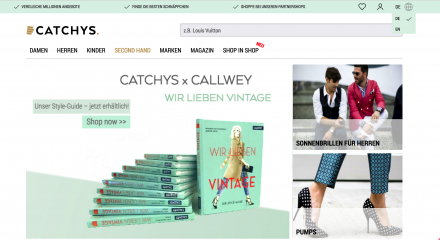 And last but not least: What has Franzi Majer always wanted to say to Munich residents?

“Munich is the best city for founding a startup. Although: I would actually mainly say that to non-Munich residents.”