What was the name of that cute little trattoria in Rome? And which amazing Barcelona tapas bar was your friend just raving about?

These kinds of questions should become a thing of the past – that is, if things go as planned by Uwe Hering, one of the founders of myLike®. In 2014, the electrical engineer started developing a platform for private users and companies to save, organize and share exciting locations around the world on an individual basis.

With his fellow founders, computer scientist Marc Schallehn and industrial designer Anja Wilbert, Uwe plans to make points of interest internationally visible in the form of insider tips. myLike was recently officially launched. In our interview, Uwe explained how to use the platform and why he launched the startup, and shared his experience with crowdfunding campaigns.

They can be posted just for the user, their own friends or the general public: Places that myLike users would like to visit or have already visited can be saved and personalized with images and comments. Users decide who can see each post.

How can the app be used? Uwe gave the following explanation:

“myLike can be used for a weekend trip, travelling around the world or for an amazing evening in your own hometown. Even years after a trip, you will still be able to remember exactly where you went.”

It can also be used in other areas: For student groups the platform can provide a “survival guide” for new students, for example. For the hotel, travel and transportation industry, myLike offers a ‘Mobile Concierge’ and a ‘Digital Tour Guide’ for guests’ smartphones. It is also a useful tool that allows bloggers and magazines to make selected content mobile. This content can then be directly geolocalized to make it helpful for followers and readers.

What is new about myLike? 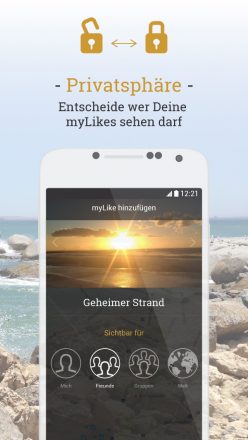 “If you do not like something about the current solutions, then that is a good reason to create something new to solve that problem.”

Uwe explained why the quote is relevant to his startup:

“That is exactly the approach we take at myLike. We are not creating something that is brand new. Instead, we have intelligently combined existing concepts to give our users real added value. We have taken special care to create an open platform that considers trust, relevance and the protection of content as our guiding principle.”

The Munich startup also wants to give communities a space where what is good is not decided by a mass of people but instead by what they call the ‘Circle of Trust’: a circle that every user is able to personally define.

“What good are 1.6 million results in one second or 882 reviews from people I do not know? I would rather have fewer results, and instead have those that are relevant to me from sources that I value and trust.”

There are quite a few success factors for startups. The trio of founders named these three:

“It is nice that we have already won a few awards. One example was winning first place in the ‘smart urban pioneer challenge’ from smart/Daimler. myLike was also voted one of the top three travel apps by TIC (Travel Industry Club) – even as a newcomer.”

Crowdfunding is worthwhile. But not always.

Whether crowdfunding is worth it or not is highly dependent upon the product. You unfortunately often find that out after the campaign is underway. For myLike, their crowdfunding campaign was part of the ‘smart urban pioneer challenge’ by smart/Daimler, which the young company entered and won. It was an exciting experience for Uwe and his team, but he would not necessarily recommend it to others:

“I would not recommend crowdfunding for software platforms like ours. Physical products can take off big time, but it is much more difficult with software. Crowdinvesting would have been more exciting in our case.”

Thanks to some ‘Explore Your Vicinity’ packages amounting to a considerable sum of 900 US dollars each, however, they reached their funding goal of 20,000 US dollars — which makes the young entrepreneurs quite proud. In addition to the crowdfunding proceeds, a cash prize of 25,000 euros for first place in the challenge helped the startup to continue on its path.

Additional facts and figures are now coming together. Having just gone live, the startup is currently counting on power users such as flight crews, expats, Airbnb hosts and B2B partners. The Munich-based entrepreneurs are also working with several large hostels and hotel chains, limo services and international student groups. Financing for myLike will come from these sources as well as from affiliate partners and SaaS.

The startup has potential – and it is active in the hospitality, transportation, restaurant and travel industries, a market that amounts to more than 1.8 billion euros. While there is a wide range of competition, Uwe confidently pointed out:

“The concept is unique and is catching on really well. Since we were all actively involved in several successful startups before, we feel well prepared to take on challenges.”

myLike is currently looking for investors who understand their business model and potential in this particular market.  Whether the funding comes from angel investors, family offices or partners in the industry is irrelevant to the entrepreneurs. What counts is the synergy that the potential investors envisage.

At this point, we had to find out – what is Uwe’s favorite myLike? He had several to share:

“The English Garden – just a few feet away from where I live – is perfect for jogging, swimming and socializing. Unique in all the world. The Isar River, with its trails for mountain biking, is also pretty special.

You can also take a look at myLike to find quite a few of my tips – but of course not all of them. There are lots of places that I have only saved for myself – one is a yoga platform in the mountains.”

Here is a short myLike video to give you some inspiration – you just might recognize some of the pretty areas in Munich…: